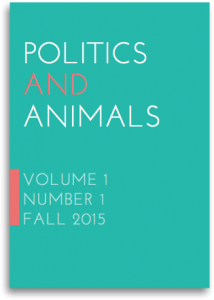 About Politics and Animals:

We are pleased to announce the release of the inaugural issue of Politics and Animals, a peer-reviewed, open access journal exploring the human-animal relationship from the vantage point of political science and political theory. Politics and Animals hosts international, multidisciplinary research and debate — conceptual and empirical — on the consequences and possibilities that human-animal relations have for politics and vice versa.

The first issue of Politics and Animals is online now, featuring invited contributions from Elisa Aaltola, Paola Cavalieri, Stefan Dolgert, Sue Donaldson and Will Kymlicka, and Tony Milligan. The articles can be accessed without fees or subscriptions at our website: http://www.politicsandanimals.org.

For further information about the focus and scope of Politics and Animals or to subscribe to the journal’s RSS feed, please visit http://www.politicsandanimals.org.

We invite you to correspond directly with us at admin@politicsandanimals.org if there is any further information you may need.

as been written on environmental politics on the one hand, and animal ethics and welfare on the other, animal politics, as the interface of the two, is underexamined. There are key political implications in the increase of animal protection laws, the rights of nature, and political parties and movements dedicated to animals. What are the implications of the increasing attention and popularity of ethical discourses on animal welfare and animal rights for politics and political philosophy? What is the animal’s place in environmental political thought – and in 21st Century political philosophy per se? What can, rather than should, politics do for animals – what institutions and practices are suitable and desirable? Can animal ethics learn from animal politics? 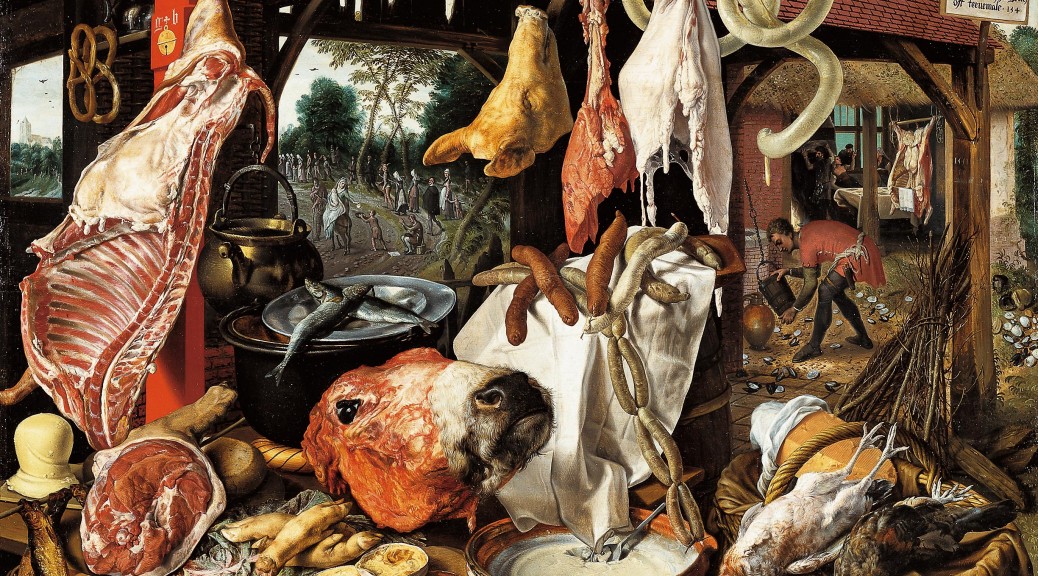 This post is an edited version of a short presentation I held at the pre-symposium event for the “Exploring the Animal Turn” Symposium at the Pufendorf Institute, Lund University, on 25 May 2014. A longer version of the argument is forthcoming as a book chapter this winter.

This is perhaps especially true in Sweden, a country that often prides itself for having the best animal protection legislation in the world. (This message is incessantly repeated in this country: by politicians, in the media, in industry propaganda, and so on.)

This taken-for-grantedness of animal welfarism as a universal good often goes along with a progressivist understanding of its historical emergence. According to this view, human attitudes toward animals have followed an essentially progressive trajectory.

In short, the story goes something like this. Long ago, people didn’t care much about animals at all, and reduced them to resources and property. Over time, however, awareness of animal suffering grew. Some people started protesting against animal cruelty and formed organizations to pursue reform. Eventually, laws were founded against the wanton tormenting of animals. And, some time later, an important next step was taken by the institution of a more comprehensive system of legal regulation designed to prevent animal suffering (and not only punish animal cruelty after the fact) by setting clear standards for the keeping and handling of animals. This crowning achievement of the humanitarian movement is what we know today as animal welfare.

This final ‘welfarist turn’ is often seen as a decisive step forward in the development of social morality. Moreover, it has often been seen as the logical continuation of expanded animal friendliness. The old anti-cruelty awareness was, in this sense, the seed and modern animal welfarism is the flower.

Now, the argument I wish to make is very different from this common view of human–animal history.

In my view this ‘turn to welfare’ in Sweden was not so much a step forward for the animals, as it was a way for speciesist relations to overcome a long-standing crisis and reaffirm themselves. In short, the anti-cruelty discourse of the nineteenth century had become an obstacle to the expansion of speciesism that had to be eliminated, and this was done with the help of animal welfarism.

This is a pretty harsh judgment, but I will try to qualify it briefly.

I. The abolitionist critique

First, it has already been seriously be questioned whether animal welfarism ever meant any improvement for the animals. As several ‘abolitionist’ authors like Gary Francione and others have argued, more animals are used in more intensive ways than ever under the modern system of animal protection. From this perspective, animal welfarism does not signify the beginning of the end of speciesism, but rather represents its highest and most developed ideological form: the most intense oppression of animals ever in world history, but conveniently draped in the language of its opposite.

In the case of Sweden, we can certainly say that the welfarist turn, represented by the 1944 animal protection law, did not entail any significant change for the animals. The new law did not interfere with any significant practice of animal use. Rather, it ratified already estabished practices, and it was widely supported by the animal industries at the time.

II. The dislocation of the anti-cruelty paradigm

What we still lack, however, is a historical understanding of the emergence of this paradoxical paradigm.

This brings me to my main point: that animal welfarism in Sweden did not appear as the logical continuation of an older anti-cruelty paradigm. It rather appeared as a response to the older anti-cruelty discourse itself that had become too politically troublesome.

Here we need to go back in time to Sweden’s first anti-cruelty law that was instituted in in 1857. This law prohibited the exhibition of ‘apparent cruelty’ in the treatment of animals. It was founded partly on the recognition of animal interests as worthy of protection, but it also had a clear disciplining purpose. The political rhetoric was almost exclusively directed against the lower classes whose lack of refinement and education was represented as the main cause of animal cruelty.

What was targeted, then, in the beginning, was the moral character of the animal abuser that had to be reformed—all part and parcel of the civilizing project of the rising bourgeoisie.

Over time, however, the notion of ‘apparent cruelty’ expanded in scope.The notion in itself invited questions and comparisons: if it was illegal cruelty to beat or overwork a horse in the street, then why wasn’t it ‘apparent cruelty’ to inflict as much or more pain in the laboratories or in the slaughterhouses?

Here, the notion of ‘apparent cruelty’ came to serve as a kind of ‘nodal point’ to which new elements could continously be attached. A signifying chain was forged that could include more and more practices of animal exploitation. This chain was thus open-ended—it was always potentially possible to add more elements to it. Schematically put:

‘Apparent cruelty’ = beating and overworking horses in the streets

which in turn could expand to

This meant that a practice of animal use that was completely accepted one minute risked being compared to something that was already criminalized in the next minute. In other words, the meaning of cruelty threatened to overflow a whole range of practices that no one ever had intended to challenge. Obviously, somewhere along this line, meat eating and animal use as such risked coming into the line of fire.

This, of course, spelt trouble for the speciesist order as the chain always threatened to impinge on human habits, privilege, and profits.

The real problem, then, was not that there were some uneducated elements of society who could not tell animal cruelty from legitimate animal use.

The real problem was that society itself did not know where to draw this line, because the norms governing the human–animal relationship were deeply contradictory and lacking any unifying principle beyond sheer human power over non-humans. (Which, of course, did not fly very well as an enlightened argument.)

If one is allowed to simplify 100 years of political debates, one could say that the debates in Sweden between the 1840s and the 1940s was an extended attempt to grapple with this fundamental dislocation in the speciesist social order. A dislocation that grew ever more troubling as the notion of cruelty continued to expand.

Two main strategies were employed to maintain speciesist relations in the face of this dislocation.

The first was ideological displacement of the problem to certain ‘other’ or ‘othered’ groups.

I have already alluded to how the lower classes were targeted, but they would be followed by other ‘usual suspects’ marked as likely animal abusers: uneducated farmers, foreigners, or minorities like the Jews and the indigenous Sami population—on occasion even a ‘mad scientist’ or two.

In all cases, the source of animal abuse was never located with speciesist Swedish society as such. ‘We’ never harmed animals, only ‘they’—the others—did.

‘Our’ animal cruelty, if it existed at all, was only accidental and contingent, whereas ‘their’ animal cruelty was essential. By this kind of scapegoating, Swedish society could exonerate itself from responsibility for its own systemic animal cruelty.

The second strategy was to employ a logic of difference, to break up the expanding chain of equivalence associated with ‘cruelty’.

This was done by supplementing the old animal cruelty paragraph with special rules for certain types of animal use—thereby separating these, and severing them, from the expanding chain of practices associated with cruelty.

For example, special laws were introduced in 1917 for menageries and in 1937 for slaughter. These reforms were framed as progressive and as improving conditions for the animals, but what they did in practice was to immunize these practices against the charge of animal cruelty. As long as menageries and slaughterhouses stuck to the rules and the standards defined by these special regulations, the legal accusation of animal cruelty could not be levelled against them.

The final neutralization of the unruly anticruelty discourse came in 1944, with the insitution of Sweden’s first preventive animal protection law. This represented, in effect, the abolition of the old anticruelty paragraph. This paragraph remained on paper but would be powerless in practice. As long as the animal industries kept to the general rules of animal husbandry—standards that were never set so high as to threaten their profits—animal cruelty charges would not come into question.

This animal welfare reform was hailed as a great step forward by politicians from all camps. Considering, however, its actual, functional role, we could just as well say that it represented a remarkable reassertion and reaffirmation of speciesism. By one very efficient discursive move, the whole dilemma that had led to recurring debates over a century was sidestepped, and the way was paved for the the expansion of animal exploitation on a previously unimaginable scale.

The rise of political animal welfarism in Sweden, then, could be described as the discursive reinvention of speciesism in a time when cruelty to animals was being institutionalized as standard practice in animal agriculture. 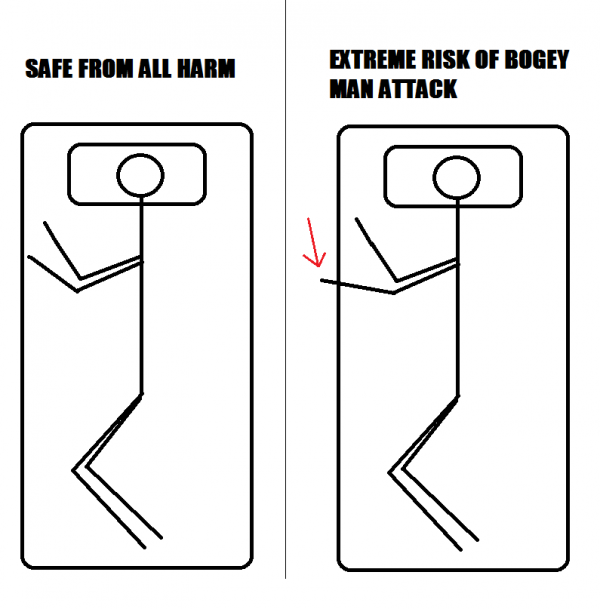 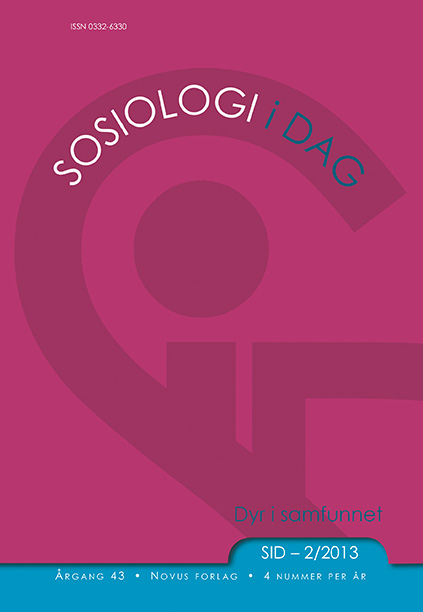